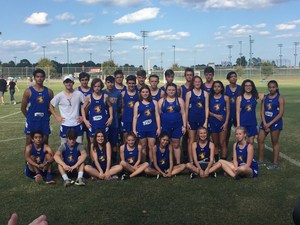 The varsity girls placed 3rd, edging out Sabine with a tie-breaker. Sophomore Sophie Shilling led the way for the Lady Knights in 5th place in 14:36 with Libney Huerta and Julia Eddings 30 seconds back.

The JV girls had three finishers, with Rebecca Rulsey winning the JV race by 2 minutes.

Varsity boys finished 2nd with an outstanding race from freshman Caleb Abbott leading the way in 3rd overall with his fastest 5K in 18:56. Cason Bledsoe also placed in the top 10 in 7th with his fastest time of year in 19:35.